Brewers have more hop options than ever before, especially with growers making new varieties of hops.

To bring new life into your brews, you should consider Motueka hops. Motueka hops are made in New Zealand and have citrus characteristics. This hop type is bred from Saaz hops, the most notable form of hops that are used to brew a traditional Bohemian Pilsner. They’re one of the most popular hop varieties derived from New Zealand.

You can find Motueka hops in a variety of beers such as Pilsners, Lager, and Belgian ales. Since the citrus flavor overpowers the bitterness, this is a great hop variety for non-IPA-style beers that still require hops. Before we get on with our full Motueka Hops Guide, let’s look at some of the general facts about Motueka hops. 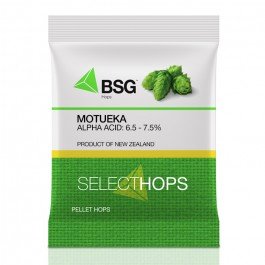 Motueka hops were formed around 1997-1998 in New Zealand. They’re the product of Czech Saaz hops as well as other New Zealand varieties. Hort Research is credited with introducing this hop type. In addition to Motueka hops, they’re also called Belgian Saaz and even B Saaz.

Since Saaz hops are the parent hops, Motueka hops carry many of the same characteristics. When you smell these hops, you immediately get a whiff of citrus notes. You’ll also sense floral, tropical, and other fruity notes. The hops offer a more fruity flavor than their parents, but you still get those spice herbal notes (such as basil and rosemary) plus more floral flavors.

This hop is popular because it’s well-balanced. The bitterness is at a minimum and the flavor is very clean. The fruity and spicy herb notes give a pleasant flavor to any beer, especially with Pilsners and lagers.

Because Motueka hops are well-balanced, they contribute more to a beer’s aroma than the taste. But since this hop is versatile, it can be used in a wide variety of beers. For example, the high alpha acid content makes this beer great as a variety and single-hopped beer. It’s a great hop type for a variety of beers, from classic Pilsners to high gravity beer.

Since the citrus and fruity notes are the most prominent, brewers often use this hop style when dry-hopping. Dry-hopping the beer will give your brew the brightest citrus and floral aromas. If you plan on dry-hopping your beer with Motueka hops, we recommend using pellets to prevent the hops from spoiling.

Can You Grow Motueka Hops DIY?

Since Motueka Hops are proprietary hops, there’s no way you can grow them in your yard. You can’t get whole plants or rhizomes for the sake of growing. You can only purchase the plant for brewing. Fortunately, there are a variety of online stores where you can find these hops.

Some brewers may be able to find Motueka hops at their local brewing supply store. If you have no luck, you can find these hops online. If ordering online, we recommend you order them in pellet form since they will travel better. If you prefer the whole cone, we suggest looking early in the season.

Another reason to use Motueka hops is since they’re brewed in New Zealand, brewers in the Northern Hemisphere can benefit from accessing these hops in their prime when other hop varieties aren’t available.

Can You Get It as a Lupulin Powder?

As stated previously, Motueka hops are good to use as in a single-hopped beer but are also a good addition to variety-hopped beers. But which hops do Motueka hops pair best with? Here are a few recommendations:

Citra’s flavor and aroma are comparable to Motueka’s, which is why these two pair the best. It’s recommended you brew a lighter beer, such as a pale ale, with these beers. Dry hop the beer to bring out the citrus notes in both hops.

If you want to take the tropical flavor to new highs, combine Motueka hops with galaxy hops. Galaxy hops are extremely flavorful and fruity, boasting flavors such as guava, peach, and orange. These mixes well with citrus Motueka hops, especially when used in a pale ale and other light beer varieties.

Some other popular New Zealand hops include:

While you’ll mainly see Motueka hops brewed for Pilsners and Lagers, this hop variety is well-balanced and versatile. This means they’re often used in a variety of beer styles, such as:

Best Beers That Use Motueka Hops

As you can see, Motueka hops are very popular and can be used in a variety of beer styles. There are many great beers that use Motueka hops, but here are some of the best ones.

Invasion is a tropical pale ale and one of the best examples of the beer style. Cigar City brewed this beer in the inspiration of Tampa’s yearly Gasparilla festival and Tampa’s long history of pirates and pillaging. Since Gasparilla is a fun festival, Cigar City wanted to celebrate the festivities with a light pale ale that holds tropical notes.

In addition to Motueka hops, Cigar City brewers also used Simcoe, Galaxy, Amarillo, and Pacifica hops to capture those tangerine notes. The beer has moderate bitterness but the tropical notes but this beer is extremely flavorful.

The brewers at Cigar City Brewing developed this moderate alcohol and tropically inspired beer to perfectly complement the fun and excitement of the Gasparilla Pirate Invasion, with generous additions of Motueka, Galaxy, Simcoe, Pacifica, and Amarillo hops adding tangerine and nectarine notes paired with a moderate body and vibrant carbonation.

This American Pale Ale is on the slight hoppy side, dry-hopped with Motueka hops. The hops are also balanced well with American Malted Barley. It has 5% ABV.

Track 01/31 Saison by Brew By Numbers

I’m not seeing this beer on the brewery’s website, which tells me this was a limited-release beer. But it got a decent rating, which is why it still made this list. This season has a lovely gold color with a lemony aroma. The flavor is citrusy and slightly sweet. It only has an ABV of 4.2%, so it’s an easy-drinking beer.

Again, I think this one is also a limited edition beer because I can’t find it on the brewery’s website. But again, I’m mentioning this one because it received decent ratings. This is a single-hopped IPA. With a 6.7% ABV, this is stronger than other beers that use this same hop.

As an IPA, it’s definitely more on the bitter side, but the Motueka hops to balance out this bitterness with tropical notes. Overall, this IPA is smooth and a good choice if you want something strong but still easy to drink.

Answer: You’ll mainly taste citrus notes, specifically lemon and lime. But since Saaz hops is one of the parents, you’ll also taste spicy notes — but not spicy as in pepper spicy, but the kick you get from certain herbs. I would compare it more to basil and rosemary than anything. You’ll also taste other earthy notes, such as floral flavors.

Answer: I can’t find any health facts on Motueka hops, but I am finding lots of research on the health benefits of hops in general. Since hops are used in medicine, they do have some benefits. However, they’re not a miracle plant and have limited healing benefits.
They are said to have powerful anti-anxiety effects and many people take hops for sleep disorders. However, there’s little evidence supporting these claims.

Question: Can Motueka Hops Get You High?

Answer: We now know that hops and cannabis are genetically related, which is why your favorite IPA may smell, well, familiar. But can any hops, including Motueka hops, get you high? The easy answer is no. There’s a key reason why– hops don’t contain THC, the psychoactive cannabinoid in marijuana.

So, why do some hops smell dank? That’s because cannabis and hops share many of the same terpenes, which can cause some effects on their own. For example, Motueka hops contain myrcene, a terpenoid also found in cannabis. Myrcene causes many effects, such as sedation, that you experience when drinking beer and smoking marijuana.

Question: Does Corona Use Motueka Hops?

Question: Why Are Hops Important in Beer?

Answer: Hops are a plant. They’re shaped like little cones and there are various types of hops, all having their own distinctive scent and flavor. Hops aren’t only used in beer but are also used in different food and even in medicine. Their biggest contribution to beer is the flavor and aroma, especially in hop-heavy brews such as IPAs.

There’s a myth that hops contribute to the ABV of beer. This is a myth — hops add nothing to a brew’s ABV, malt does that. With that being said, hops can be added to different stages of the brewing process to impact the intensity of the flavor and aroma.

Question: Which Beer Has the Most Hops?

Answer: Dogfish Head takes the crown with their Hoo Lawd beer. It’s been verified by third-party labs as the hoppiest commercial beer ever and has 658 IBUs.

Question: Which Beer Has the Least Hops?

Answer: This is actually one of my favorite beers, Weihenstephaner’s Hefeweisbeer. As a German hefeweizen, this style is an unfiltered wheat ale with a good amount of yeast. You’ll taste very few hops; rather, you’ll taste a very bready and doughy beer with a slight spice profile.

There are many hops varieties out there, such as Motueka hops. Motueka hops are bred from Czech Saaz hops and other New Zealand-based hop varieties. They have been around since the late 90s and you can find Motueka hops in a variety of your favorite beers.