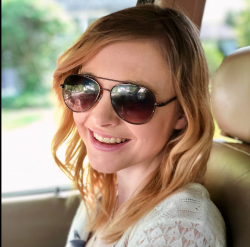 Erin Jamieson
Erin loves to drink a good stout with her friends and family regardless of the location. She's always eager to try something new and lives near Jungle Jim's International Market, which gives her access to a wide variety of beer from all over the world. When Erin isn't searching for a new beer to try, she's helping you find the right one for your needs and ensuring you know exactly what to look for!

At the beginning of May in Manistee County, the local library isn’t celebrating. It isn’t waiting for Memorial Day to kick off celebrations– but instead recognizing May as the month of homebrewing. Explained from books about everything about homebrewing culture to quality ingredients for recipes, the event shows just how far homebrewing has come.

Celebrated specifically as Home Brew Day on the first Saturday of the month, May has come for some as a month that celebrates the growing culture around brewing beers and ales at home. While it’s interesting to see Manistee County offering featured books and films, including books by local Michigan writers, it’s no small phenomenon.

In fact, by estimates made from the Home Brewers Association, there are 1.1 million Americans making their own drinks at home– which is likely a sizable undercount. The culture of homebrewing has been seen as a way to get closer to what you drink, almost an art of itself, and, for some, a way to control both cost and ingredients.

But celebrations aside, there are a few problems, most notably that some are interested in brewing at home but don’t know how to start. Not knowing which ingredients to use can not only result in a poor tasting beer– but, if done incorrectly, could even make you ill.

In this guide, I’ll tell the main ingredients you’ll need to make your brews taste better, and a few recipes to get you started.

Why do people homebrew beer?

Homebrewing beer isn’t for everyone– but if your curiosity has been peaked, homebrew beer does in fact have a number of benefits. To dispel some myths and misconceptions about brewing beer– and adding in a few downsides too, here’s what you need to know before buying ingredients to brew your own beer.

Is Brewing beer cheaper than buying?

Brewing your own beer may save you money– but it could also cost you too. The main way brewing beer saves money is if you’re replacing it with going out for drinks. When going out for drinks, you add in transportation costs, and you may spend more than intended, from drinking more than you might at home, to ordering food too.

But the truth is that brewing your own beer won’t save you money in the long run vs buying most grocery store beers. First, there’s time to consider: brewing your own beer, from start to finish product, can take around eight hours. Add in the ingredients, and most of the time, you’ll be breaking even vs common store bought beers (though you may save some over specialty beers).

In other words: it depends on your current drinking habits whether or not you will save money, but it probably shouldn’t be your primary factor.

One area where homebrew has a clearer advantage is actually health benefits. Homebrewed beer allows you to control the quality of ingredients. Commercial beers often include preservatives and additives. In addition, commercial beer tends to be lower in Vitamin B. Not only can Vitamin B be helpful, but it can even potentially reduce the impact of hangovers.

Other nutrients homebrewed beer tends to be more rich in includes fiber, protein and silicon. That isn’t to say beer is the healthiest drink, nor that consuming commercial beer in moderation is problematic but it’s still a plus, and undoubtedly a reason why many want to see the best homebrewing ingredients explained.

What other reasons should you consider homebrewing?

Homemade beer, when made correctly, can be not only good but delicious and also distinct from other bears you’ve tried. It can become a new hobby or way to bond with others and even make more unique gifts. The ability to customize beer to your own liking and even experiment some with flavors and recipes are perhaps the biggest draws to brewing your own beer at home.

What ingredients do you need to brew beer?

There are 4 main, or essential ingredients that you most have to form the base for any beer. After these main ingredients, there’s room for experimentation, both in flavors and process, to make the beer your own.

Hops grow on a flowering vine that produces one season a year. While there are still small producers, large-scale production has shifted into mass production, with some farms harvesting an astonishing 50,000 acres or more of hops per year. In the United States, hops are mostly produced in the Pacific Northwest, most notably in Washington State but also Oregon and Idaho.

Not unlike grapes used for wine, hops are very much linked to the land they’re grown on, with distinct qualities in terms of terroir, flavor notes, and acidity levels. The type of hops you use can greatly affect the profile of your home brewed beer.

European Hops, also known as Noble Hops, have lower levels of acidity and trend to produce slightly sweeter, less bitter beer. Here are some of the more notable varieties.

American hops are popular for craft beers. Traditional hops in this category are slightly more acidic than European hops, but American bred hops have acidity levels as high as 14 percent– compared to an average of 3 percent for Noble Hops. There are countless varieties of American Bred options– here are just a few popular favorites.

Malt is germinated and dried grain. To produce malt, manufacturers soak it in water, then dry using hot air. During this process, the grain also develops critical enzymes, and the grain is essentially being converted into simple sugars. Certain malts can be steeped, or used mashed.

Adjunct grains have no available sugars or enzymes and must be mashed with a base malt. These are actually not yet considered malt, and include starchy grains such as maize, torrified wheat, flaked oats and barley, pumpkin, potatoes, and rice.

Base malts are essential for all grain beer and can be brewed. These include barley malts, such as pale malt, Munich malt, and Pilsner malt; non-barley malts such as wheat malt or rye malt; and high-kilned malts which are used in dark beers and lagers. American bases tend to range from neutral to mild, while British malts lean more robust and bread like.

Both caramel and crystal malts are not typically used as the main grain type, but as a way to add sweetness and change the hue, with light malts providing sweeter notes and deeper malts providing roasted and nutty flavors. This category also includes dextrins, which are known for adding a fuller body and sweet, caramel notes.

Roasted malts include all grains and malts that have been heavily roasted, lending to darker and rich, bread-like tastes. Roasted malts can be both steeped and mashed and are often used for all grain beers as well as to add complex flavors.

Black malt, also known as patent malt, chocolate malt, and roasted barley are among the most popular, while Kiln-coffee malt adds a distinct flavor. While delicious to use, roasted malts can be tricky: you shouldn’t use more than a pound per gallon batch.

Toasted malts, also known as kilned malts, are used to add flavor enhancements, and constitute a small percentage of any brew, usually at most half a pound per five gallons.

Yeast is tricky to work with: one of the most common mistakes made amongst homebrewers is to neglect the importance of temperature. Different types of yeast, likewise, will produce different results, so it’s important to select the right yeast.

Ale yeast performs best at 68 degrees fahrenheit, though some ale yeasts can work at temperatures as high at 80 degrees. They exhibit excellent top fermentation and are most commonly used to make fruity beers that exhibit unique flavors.

A common method used with ale yeast fermentation is top cropping. For this, you allow fermentation to occur for 12 hours, then collect yeast from the top, making for a bountiful yeast– but if the fermentation room does not have the proper sanitation requirements, this also puts you at greater risk for contamination.

Lager yeast brews best at a notably cooler 50 to 55 degrees Fahrenheit. Especially popular for commercial producers, beers with lager yeast tend to last longer, and, unlike most yeast, actually have bottom fermentation. Due to the cooler temperature, beer produced with lager yeast is lower in ester and fusel alcohols, but higher in sulfur. You’ll need around twice the starter as you’d use for ale yeast.

European wheat beers use specialty yeasts, including Belgian and Wyeast strains, but these tend to be harder to get your hands on, trickier to work with, and more suited for professional use vs beginning home brewing.

Your final ingredient is a simple one: water. However, that doesn’t mean you should just use water from the tap. The best water to brew with is water that is mineral free, and many specifically prefer Mountain springwater. That said, any water will work– it’s just that the taste may be affected by the water used.

Want to further customize your beer? One aspect I especially admire about homebrewing is the ability to experiment and customize flavors by adding new ingredients. I most recommend fruit (citrus and stone fruits, as well as tropical fruit and dried fruit like figs); accent notes (like vanilla, cacao, coffee, and coconut), and seasonings (such as herbs, cinnamon, cardamom, lemongrass, ginger, and even cloves, in moderation).

Where do I buy ingredients for homebrewing?

You can buy ingredients from online retailers– from hops to specialty yeats, accents, and even starter kits if you’re relatively new to homebrewing. Here are a few places for one stop home brewing shopping.

This site mostly sells starter kits for new brewers, from craft beer starter kits to hard cider kits, as well as a decent selection of some essential ingredients. Shop Here.

Home Brew Supply is a good do to if you’re most focused on stocking up on ingredients, with a clean, simple interface and a selection of hops, grain, and yeast. Shop Here.

Question: Can I brew beer at home and sell it?

Answer: While it is now legal to brew beer at home, it is still illegal to sell your home grown beer in the United States or abroad, without a commercial license.

Question: Can you ferment beer too long?

Answer: Longer fermentation is not necessarily better. If you ferment beer for too long, it can actually go against your purposes and ‘kill’ the yeast. That’s why it’s important to follow directions and use a base recipe before experimenting.

Question: Can homebrew kill you?

Answer: Homebrewing can be a pleasing and rewarding activity– but it’s essential to take proper safety precautions, but it’s more or less what you’d take with any food preparation.

Methanol poisoning can occur with alcohol tainted with methanol– this typically is rare, and can occur in homebrewers mostly who are making rum or gin. You can learn more about this risk here. In all, it’s a very rare occurrence, especially if you follow proper brewing standards and a recipe. With beer brewing, the main risk is lack of general sanitation.

Homebrewing is a difficult process at first but can be quite rewarding. Use the best base ingredients, and, once you’re comfortable, add in some of your favorite accents.

Need some recipe inspiration to get you started? Check out this pale ale for beginners, this expressive oatmeal stout, or, if you’re feeling adventurous, try this recipe for Czech Style Dark Lager or Urban Chestnut Hallertau Wolamot Doppelbock.