With our Golden Promise Malt guide, you will discover why this traditional malt is still used in many great-tasting beers and ales.

While Golden Promise isn’t as popular as it used to be, it still offers homebrewers a chance to create excellent beers using this classically British barley.

We will have a look at what Golden Promise tastes like, things you need to know before you start brewing with this malt, and we will explain what hops go well with Golden Promise to create fabulous beers, ales, IPAs, and even stouts.

GoldenPpromise pale malt is made from the famous spring barley variety. Considered a Scottish equivalent to the English Maris Otter malt. The sweet, robust malt flavor make it a great choice for any beer, especially English or Scottish ales.

What is Golden Promise Malt?

Golden Promise Malt is made from barley grown in Scotland, and it is the perfect malt to begin making Scottish and English ales.

Golden Promise Malt has been used for beers and ales since the late 1960s, and it was originally created to cope with the unpredictable, wet, and cold weather that Scotland experiences. However, the barley was originally grown in the 1950s, and it was the first barley protected under the 1964 Plant Varieties and Seeds Act which allowed the growers to claim royalties on the crop.

The malt was a staple of home and commercial brewers in Scotland and Britain, where it is mainly used as a base malt. However, the popularity of this type of barley has declined, and it isn’t as widespread as it once was.

Beers and ales brewed with Golden Promise Malt provide several different flavors. You will find a sweet yet robust taste in these beers, while caramel hints combine to create a clean and refreshing finish.

You can use Golden Promise Malt in many types of brews, and its flavor profile lends itself to:

Some great examples of commercial brews that utilize Golden Promise Malt include:

Golden Promise malt contains a range of ingredients that help to deliver is distinct and fresh flavor.

Many people combine Golden Promise with a range of hop varieties to create some excellent brews. For example, a typical Pale Ale recipe with Golden Promise Malt includes:

There are many different ingredients out there that can be used with Golden Promise Malts to create some superior tasting home brews.

How to brew beer with Golden Promise Malt

Golden Promise Malt has a long history when used with British ales, beers, and it is excellent for use as a base malt. Unfortunately, the malt isn’t as widely used as it once was, although you can still buy this malt easily.

If you are going to use Golden Promise Malt for your homebrews, you need to store them correctly. Failing to do this will result in the malt breaking down and turning a darker color over time which won’t give you the great tasting beers and ales you want.

To store Golden Promise Malt correctly, you should keep it in a dry environment and away from any pests. The temperature should be between 50° – 70°F (10° – 21° C), and the best way to store this malt is to put it onto an air-tight bag. Freezer bags are ideal for this.

If you have crushed Gold Promise Malt, this should be used within two to three months; however, unmilled malt can keep for up to six months as long as it is stored in the right way.

When to add Golden Promise Malts

Golden Promise Malt can be used as a base malt (as it has high diastatic power), and it can make up 100% of the grain for certain drinks. In addition, this malt can be used in a single infusion mash.

When using this as a base malt, you can add in other grains later in the process to create some great-tasting brews. Even though Golden Promise Malt does give off a nice refreshing flavor, many people add in darker malts to contrast this.

In our next section, you can find out what other malts and hop varieties work well with Golden Promise.

Golden Promise can be used alongside various other malts and hops, and it is very versatile as it is utilized to create a range of drinks, including stouts, IPAs, beers, and ales.

Cascade is one hop that works well with Golden Promise Malts as its light and fruity flavor complements Golden Promise very well. You could also use Simcoe Hops as they have been described as ‘Cascade on steroids’ if you want a more intense aroma and taste.

Golden Promise Malts provide a light flavor with hints of caramel, and they are used to significant effect in various lagers and ales. Unfortunately, Golden Promise isn’t readily available, although it isn’t as popular as it once was; however, if you find yourself without this malt, there are some alternatives you can use. 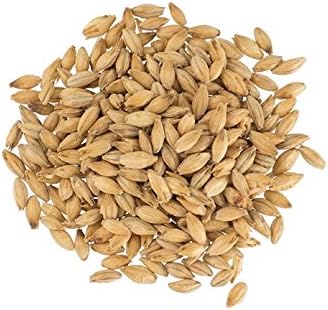 Optic Malts is a pale ale malt that is utilized in many English and Scottish ales. This malt is full-flavored, and it has hints of biscuit, which can help to create some unique brews. You can use Optic Malts as a base malt as it has good diastatic power, or it can be added later in the process. Optic doesn’t have the same sweetness you find with Golden Promise, but it is a great malt to use in your beers and ales.

Also known as optic malt, spring pale ale is a widely-grown variety of barley in the United Kingdom known for its aromatic qualities. This is a floor-malted barley, that can add a slight biscuit flavor to the beer brewed.

Another good alternative to Golden Promise is Halcyon Malts that has been used since the 1980s. This malt has a nutty aroma to it, and, like Golden Promise, it does contain some hints of caramel, although this is to a lesser extent. Overall, it is a fairly mild malt, but it can create a diverse list of beers, especially classic English pale ales.

Answer: Golden Promise is quite a light malt that has a refreshing taste alongside hints of caramel. It is used in many lighter British ales and beers since the 1960s.

Question: How do I store Golden Promise Malt?

Answer: Storing Golden Promise Malt is essential to ensure that it stays fresh and ready for us. You can keep crushed-gained Gold Promise Malt for two to three months, while unmilled malt can be used for up to six months. Put the malt into an air-tight bag and make sure it isn’t in direct sunlight and the temperature is between 50° – 70°F (10° – 21° C).

Question: Can Golden Promise malt be used as a base malt?

Answer: Yes. Golden Promise Malt has high diastatic power, so it is perfect when used as a base malt. In addition, you can use this malt in conjunction with many different hops to create unique and refreshing homebrews.

Question: What types of beers use Golden Promise Malt?

Answer: Golden Promise has an EBC of 4 – 6 °, which means that the beers will predominately be very light in color unless you add darker ingredients. This is why Golden Promise is favored for many pale ales, blonde beers, and different lagers.

Question: Where can you buy Golden Promise Malt?

Answer: Even though Golden Promise Malt isn’t as popular as it once was, it is still readily available for commercial and homebrewers. We recommend buying Brewmaster – GR355F Golden Promise Malt as it provides brilliant value and can be used to brew a vast number of drinks.

Golden Promise Malt is classic British barley associated with many great Scottish beers and different ales worldwide. Even though it isn’t as popular as it was in its heyday, many commercial and home brewers still turn to Golden Promise as a base malt.

With a subtle and crisp taste, this malt works excellent with many different hops. With Golden Promise, you can start making fantastic beers and ales using a traditional malt, adding a unique edge to your brews.

GoldenPpromise pale malt is made from the famous spring barley variety. Considered a Scottish equivalent to the English Maris Otter malt. The sweet, robust malt flavor make it a great choice for any beer, especially English or Scottish ales.